The Dominican Republic is the country that makes up the eastern two-thirds of the island of Hispaniola.  Haiti covers the island’s western end.  The Dominican Republic is in the West Indies island group, about 575 miles (925 kilometers) southeast of Miami, Florida.  The country is a land of fertile valleys and forested mountains.  Santo Domingo, a busy port city, is the capital and largest city of the Dominican Republic.  The country’s name in Spanish, the official language, is Republica Dominicana.  Christopher Columbus landed on Hispaniola in 1492.  Some historians believe he is buried on that island in the Cathedral of Santo Domingo.

Most Dominicans speak Spanish and follow other ways of life brought to their island from Spain.  The early Spanish colonists nearly wiped out the Indians who lived on the island before the Spaniards arrived.  African influence, which came to the country chiefly by way of the slave trade, is strong.  In Haiti, most of the people are descendants of slaves from Africa.

About 75 percent of the people are of mixed black and white descent.  About 10 percent are black, and about 15 percent white.  Some descendants of ex-slaves from the United States and other Caribbean island colonies live near Samana Bay in the northeast.  A small group of European Jews settled near Puerto Plata in the north about 1940.  Current population is 10,053,000 (World Bank figures).  Most Dominicans are Roman Catholic (90%).  Some people who live near the Haitian border practice voodoo religions.

Most Dominicans who live in rural areas work on farms.  Some own small farms and raise their own food.  They sell some of what they raise to buy clothing, household goods, and other items.  Other Dominican farmers work for wages on large plantations, especially sugar plantations.  Many Dominican farmers live in two-room shacks that have thatched roofs and dirt floors.  Most city dwellers earn a living as factory workers, as government employees, or by fishing.  Many of them live in crowded, old Spanish-style apartment buildings.  Dominicans dress in much the same way as people in the United States.

The Dominican Republic has a warm, tropical climate all year.  Temperatures vary little and seldom go below 60o F (16o C) or above 90o F (32o C).  The country averages about 60 inches (150 centimeters) of rainfall a year.  The rainy season lasts from May to November in the south and from December to April in the north.  Hurricanes sometimes strike the Dominican Republic.

The Dominican Republic is truly a beautiful and diverse Caribbean island nation. From Pico Duarte, the highest mountain range, over 10,000 feet in elevation, to the lowest lake on an island and lowest surface point on an ocean island on Earth at −27 m (−89 feet) Lake or Lago Enriquillo.  Visit the Puerto Plata, Samana, and Punta Cana coastal areas where you will find some of the most beautiful beaches in the world.

Those interested in history will not be disappointed. Columbus’ visit to this island on his first and subsequent voyages left an incredible Spanish heritage unsurpassed in the New World. In Santo Domingo, the first capital of the New World, we find the first Cathedral in the Americas. Columbus’ remains are memorialized in the stunning Columbus Lighthouse, which also serves as a museum, built by the different nations of the Americas. In historic La Vega one finds the remains of the first officially recognized municipality in the New World, along with part of the first fortress built to safeguard the settlers. Not far from this location is the site of the first Christian altar built in the New World, Santo Cerro. A Cathedral sits on this spot on a beautiful hill overlooking the Cibao Valley (the largest and most fertile valley in the country.)

Or you may mount some trail horses that will carry you to the Baiguate Falls, a good spot to bathe in cool refreshing mountain-fed springs.

You have never gone souvenir hunting until you have shopped at the outdoor tourist huts at Sosua Beach. There is almost a full mile of shops to hunt treasures in. Not to mention the international and Dominican cuisine served in this area. If you haven’t brought your snorkeling equipment, you can rent snorkels and fins for under $10 an hour to explore the reefs at Sosua Beach. Your group may be interested in renting a glass-bottomed boat, or riding the surf on a banana boat. Don’t miss the pineapple-coconut drink served in a whole fresh pineapple.  You can be sure there is plenty to see and do in your free time.

Will You Sponsor A Child? 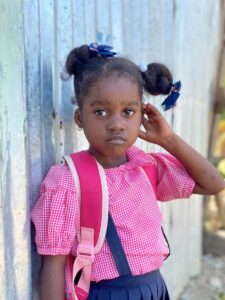 Will you sponsor a child?
Click here to learn more.